I don’t sleep well, as a rule.  I was joking the other day that the best way for me to be fully awake is to get into bed and pull the covers up.  Even if I do somehow manage to get to sleep, I’ll pop awake for a few hours in the middle of the night.  This seems to be a genetic thing, maybe.  I come from a long line of people waiting to fall asleep. 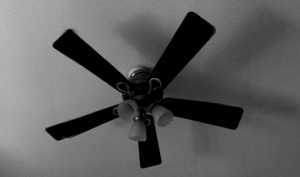 This is the ceiling of my bedroom.  I’ve spent a lot of time staring at that ceiling in the last seven years.

I looked up at this ceiling so many nights when I was feeling frustrated and lonely and disconnected.  For a long time, it was the only place that I really felt safe putting those thoughts.  I didn’t know what I wanted out of my life, let alone how to go about asking for it.  I wondered what the future would hold, and if I would be able to keep myself together.  I contemplated burning my life down so many times, while the ceiling stared back at me.

Even looking at this picture now, thinking about the way things were, is a bit discomforting.

But that isn’t the ceiling’s fault at all.  I wasn’t doing anything to help myself.  I wasn’t deconstructing things in therapy back then.  I wasn’t allowing myself to have those riskier conversations, for fear of actually having to approach those problems.  And I was so blinded by depression and feeling so stuck in my life that there was no way I would have been able to fix my life even if I knew what was wrong.

I can’t begin to tell you how many times I’ve looked at this pattern on the ceiling. At few hundred times, at different times of day, under different conditions.  At this point, it’s nearly taken on nearly religious connotations.

This is the ceiling in Jamie’s bedroom.  And while I don’t sleep any better at her house as I do anywhere else, I’m nearly always happy to be staring up at this pattern in the middle of the night.

The first time I stayed at her house, I was swimming in a sea of NRE.  Our relationship started with a reality-shaking connection that we still look back on with amazement.  So my first time looking at the ceiling in the middle of the night, it was instantly merged with those feelings.  I was sappy and in love, and I felt like there was another part of myself that was completed while I looked up at that pattern.

That part is still there with me.  When I told Jamie that I wanted a picture of her bedroom ceiling for the blog, it turned into this mini photography experiment.  She set up a tripod on the bed in the middle of the night, and sat there for about half an hour fiddling with settings on the camera.  I was happy that I was able to explain to her what it meant to me, and how it was a symbol of us.

This ceiling also makes me feel better about the other one.  When I’m home now, that ceiling isn’t full of confusion and worry.  I know my path now, and I am more complete and happy.  I’m able to be more present when I am at home now.  And when I stare up into that ceiling in the middle of the night, I’m not worried about the future.  I’m happy to be home too.  And that wasn’t that I had expected.

I’d still prefer to sleep through the night.  But sometimes being awake is a nice reminder of how much better my life has become.